I work in the Malacology Department in the Senckenberg Museum für Naturkunde Görlitz.

Click on picture below to start/stop video (1.8 Mb download)
Courtship of an undescribed Deroceras species from Turkey.

The video is playing at the natural rate (once fully downloaded); the rotation rate gradually declines over the 50 min courtship, but this video repeats after 80 s. During courtship the spoon-shaped sarcobelum of each slug merely rests on the partner's back; this is retracted before copulation when the rest of the penis everts rapidly to exchange sperm.

I work mostly on terrestrial slugs. Part of the research is taxonomic, but I am particularly interested in the elaborate genitalia and mating behaviour of these simultaneous hermaphrodites. Mating behaviour not only provides extra characters with which to establish species identity, but, because it is an isolating mechanism, may explain why some taxa are more speciose than others. We investigate the role of sexual selection and partner manipulation in explaining particular features of the mating behaviour and reproductive anatomy. Another aspect of my research has been genetic analysis, for instance to estimate outcrossing rates.

Currently much of my time is taken up as an editor of the journal Archiv für Molluskenkunde, the oldest continuously running malacological journal. Back to Contents

Click to enlarge + caption
Deroceras mating behaviour is long and elaborate, involving a prolonged courtship and then a more rapid mutual exchange of sperm between the extruded penises. A couple of videos available here show some of the spectacular behaviour. Reise (2007) reviews the interspecific diversity. Recently we have been focussing on the role of a penial gland that is everted over the back of the partner releasing a secretion. Since this occurs after sperm exchange, we suspect that its role is to manipulate the partner in some way (cf. the love darts of helicid snails). For instance, it might increase use of the donated sperm or hinder subsequent remating. A poster explains the idea, but since then experiments by a succession of M.Sc. students have tested some of these hypotheses.

Another approach that we are taking is to observe the mating behaviour of species in which particular parts of the penial morphology are unusually developed. For instance, Reise et al. (2007) consider whether the spectacularly branched penial gland of D. gorgonium is associated with unusual mating behaviour in this species.

Another reason for examining mating behaviour is to provide extra characters for taxonomy. For example, by studying the mating behaviour of Deroceras collected in the Sächsische Schweiz, we have recognised that D. rodnae needs to be split into at least two species with very different courtship and copulation behaviours (link to paper and videos). Another example is our discovery that the mating behaviour of the widespread pest species formerly known as D. panormitanum does not correspond to that of the species originally described under this name, prompting us to redescribe the pest species as Deroceras invadens (link to videos). Most recently it was the distinctive mating behaviour of Deroceras cecconii that made us realise that this long-ignored species really was valid; it turns out to be rather common and widespread in Italy. Observations of its mating behaviour was valuable also in establishing homologies between the functionally important parts of its penis and those of related species.

Our observations of mating behaviour have been much facilitated by the development of a digital video system based on security systems. 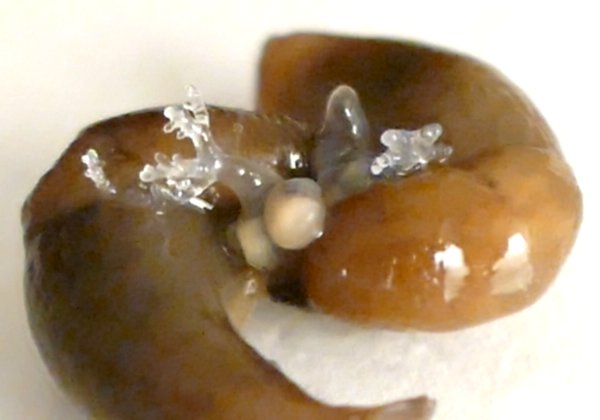 Copulation of Deroceras cecconii. The finger-like penial glands are starting to evert over the partner to deposit a secretion:
the sperm masses have already been exchanged reciprocally (one is the off-white blob attached below trunk of gland).
CLICK HERE to see video from which this still came.
Back to Contents

The spread of Arion vulgaris and its hybridisation with A. ater s.l.—with Edgars Dreijers, Anne-Katrin Schwarzer, Bettina Schlitt & John Hutchinson

We discovered the notoriously invasive and damaging slug Arion vulgaris in Görlitz in 1994. Regular sampling since then has shown it to have progressively replaced the native A. ater within the town. In the laboratory we have shown that the species will mate with each other and sometimes successfully exchange spermatophores, although at each successive stage of mating mixed couples more often failed to proceed further. Our paper compares the mating behaviour of each species in detail so to identify the difficulties of interspecific mating. While both species still coexisted we found morphological intermediates resulting from hybridisation. A paper describing their morphologies has also pointed out that our local populations of Arion ater derive from three different subspecies recognisable both morphologically and genetically: A. ater ater from Northern Europe, A. ater rufus from the British Isles, and A. ater ruber from western continental Europe. We have since confirmed these results by using microsatellite markers. Despite the occurrence of hybrids, it looks like there is little or no long-term introgression of A. ater genes into A. vulgaris. Microsatellites also reveal that within Görlitz are two or three races of A. vulgaris, which are only slowly mixing spatially and genetically. Further results from field observations of mating behaviour are awaiting publication. Back to Contents

This species is our laboratory rat. We have found that individuals are willing to mate within a few days of an earlier mating, and by utilising three Mendelian colour morphs of this species, we can assess the paternity of offspring. Selfing is usually rare, yielding very small clutches apparently as a last resort in the absence of allosperm. Individuals mated to two partners often produced clutches of mixed paternity, but one father usually predominates. Lifetime fecundity is higher in double mated slugs than those allowed to mate only once. We are currently investigating the reasons for this by closely observing matings to see why sperm exchange sometimes fails and by measuring fecundity of slugs mated twice to the same partner. Most of these experiments have been carried out by M.Sc. students and by school-leavers working here for a year under the FÖJ scheme. Back to Contents

Deroceras is the most speciose genus of terrestrial slugs; most species are externally indistinguishable but distinctive in their genitalia and mating behaviour. We have been mapping zones of contact between D. praecox and D. rodnae in the mountains of southern Poland and between D. praecox and D. fatrense in the Mala Fatra mountains of Slovakia. The species overlap very little. At one site a narrow mountain stream marks the border, but the genital morphology suggests some hybrids just where bridges cross.

In the Elbsandsteingebirge south of Dresden D. rodnae co-occurs with D. juranum, but they have a very narrow parapatric distribution, seeming not to correspond with any landscape features. These two species are closely related but never hybridise. Back to Contents

Most of the slugs and snails found in synanthropic habitats in North America are from Europe. Because there are relatively few workers on slugs and snails there, we have succeeded in finding several new species there that have not previously been recognised. Our publications of these finds include reviews of each species’ biology and ecology: Boettgerilla pallens (an update reviews further North American records), Aegopinella nitidula and Tandonia budapestensis. The latter species has considerable scope for becoming a pest, as does Deroceras invadens, whose range we have considerably extended into the Eastern USA. Most recently we have surveyed a range of synanthropic habitats in the Denver region of Colorado and the Salt Lake City region of Utah.

A. nitidula: click to enlarge
Like with many other groups, invasions from Europe to North America are much commoner than vice versa. An exception is Ted von Proschwitz's discovery of slugs from the Pacific Northwest arriving in Sweden on salal, used in the cut-flower trade; I helped with the identification. Also in Europe, we have extended the range of the slug Deroceras turcicum, initially to the Czech Republic and Slovakia, and later to Poland. Our paper (Reise & Hutchinson, 2001) also discusses its considerable range of morphological variation so as to facilitate identification. By chance, we were the first to collect the introduced carnivorous slug Selenochlamys ysbryda, from a churchyard in Wales, although we were too slow-witted to appreciate it at the time! A finding of Milax nigricans in northern France prompted us to review other occurrences outside its natural range and to highlight which identification characters are most reliable. A couple of our papers examine the synanthropic slug fauna in our own town of Görlitz and over the adjacent border in Polish Silesia. Another discovery was that of Monacha claustralis, found on a field meeting of the Deutsche Malakozoologische Gesellschaft near Jena; this was the first report from Germany, but to be expected given its spread in Poland and the Czech Republic.

I helped to write up recent discoveries in Romania of the pest slug A. vulgaris. Our paper reviews occurrences elsewhere in SE Europe. In contrast, collections by Turkish colleagues of similar looking slugs from Istanbul turned out to be an invasion of Arion ater agg. Back to Contents

Arion slugs are hermaphrodites with a long courtship finishing with reciprocal exchange of freshly manufactured spermatophores via everted genitalia. Is size of the distal genitalia (parts involved in spermatophore manufacture, exchange and digestion, and sometimes stroking the partner) sexually selected: i.e. do large individuals invest in relatively large genitalia to increase mating success? Alternatively, genitalia much larger than the partner’s could cause incompatibility. For five species collected throughout the year from one site, we weighed each slug, then dissected out the reproductive tract. Relative weights of its proximal parts indicated maturity. Adult mass varied intraspecifically 3.4–8.8-fold and interspecifically 43-fold. As slugs mature the distal genitalia grow disproportionately fast, but within adults they scale with slight negative allometry (cf. isometry of the digestive gland and slight positive allometry of the whole reproductive tract). Interspecifically the relationship is isometric. The two almost obligate selfing species have relatively smaller genitalia than similarly sized congeners.

We have since measured allometry of various components of the reproductive system of the terrestrial snail Helix pomatia and the freshwater basommatophorans Stagnicola corvus and Stagnicola turricula. This was in collaboration with Bartek Gołdyn and Tereza Kořínková. Back to Contents

Reise et al. (2001) described a sinistral specimen of Arion lusitanicus; this is only the 5th sinistral individual reported for any slug species. Our attempts to mate our specimen with dextral conspecifics indicated that it was incapable of proceeding far with courtship. We discussed the possible genetic basis of sinistrality in slugs, given the absence of sinistral siblings of three of the sinistral specimens reported. Back to Contents

For citations, see my profile in

Identifying Deroceras by dissection in the field (Mala Fatra, Slovakia)